IN A meeting room on a cold autumn day, the governor of the Bank of England settled into a witness chair to give evidence to a group of MPs. Worries were mounting about the economy. GDP growth was slowing and households were highly indebted. Nonetheless the Bank of England began raising interest rates. The governor told everyone to relax. Concerns about a “Christmas debt crisis” caused by higher rates were overblown, he said: “People have exaggerated the vulnerability of the economy to likely changes in policy.”

That was in 2003, when Mervyn King was the bank’s governor. For the first time since then, and under a different boss, Mark Carney, the bank is expected to start raising interest rates once again, after a long period of inactivity (see chart). Inflation is 3%, well above the bank’s 2% target. GDP grew by 0.4% in the third quarter, above expectations. As in the early 2000s, members of the bank’s monetary-policy committee (MPC) are coming round to the view that tighter monetary policy will have a benign effect on the economy. Are they right? 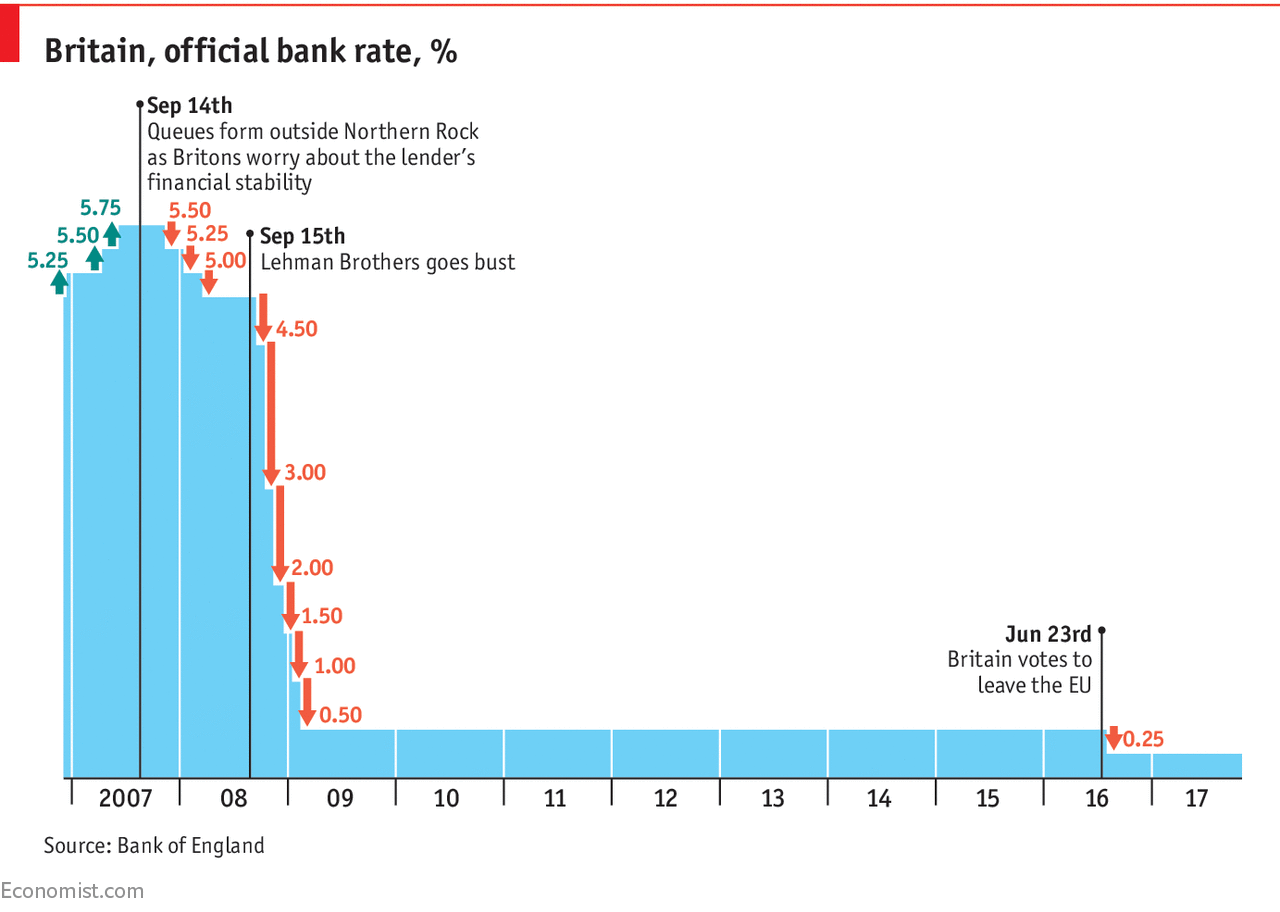 By raising or cutting the benchmark interest rate, the MPC influences the rate at which high-street banks can borrow—and, in turn, the borrowing costs faced by households and firms. In the post-war period it averaged around 6%. Yet during the crisis of 2008-09 the bank slashed it to stimulate the economy. It was cut again after last year’s Brexit referendum, to 0.25%, the lowest on record. Most economists believe that on November 2nd the MPC will change direction and raise it to 0.5%.

The reaction of the economy as a whole to tighter policy will be largely shaped by how households respond. Their spending accounts for some 60% of GDP. At first glance, Britain’s households look prepared for what is to come. True, the stock of household debt (mortgages plus consumer credit) is nearing 140% of income, which is high by historical standards. Higher interest rates would result in higher payments for those with debts. They would have less money left over for everyday expenses.

However, many Britons would also earn more interest on their savings, which are worth around 120% of income. That would give them more spending power. A rise of 0.25 percentage points in the base rate, passed on fully to savers and borrowers, would cost less than 0.1% of incomes. No big deal.

Yet such a calculation understates the probable impact of higher interest rates. For one thing, the circumstances are unusual. The bank’s “inflation-attitudes survey” suggests that when it has tightened monetary policy in the past, the public has inferred that further rises are on the way. The bank has tried before, and failed, to forestall such a reaction. The last time the MPC raised rates, it stressed that “no immediate judgment was being made about the future path of rates.” No matter: subsequently, a big majority of the population thought that further rises were likely.

The public’s reaction is especially hard to predict this time around. Interest rates used to go up and down frequently. Today, after a decade with no rate rise, many adults are familiar only with the Bank of England cutting the cost of borrowing. If people start to worry that their incomes will be squeezed more tightly still in the coming months, then consumer confidence and spending could fall by more than the MPC expects.

The effects of higher interest rates will also be unevenly felt across households. Some have plenty of savings, others have big debts. Few have both. Data on the distribution of assets and liabilities are poor. What evidence there is, however, makes for uncomfortable reading.

One worry concerns those who would benefit from higher interest on their savings. Income-bearing financial assets are unequally distributed. Such inequality also runs along generational lines. What will the wealthy do with the extra income from their savings? People with large pots are by definition squirrellers, not splurgers. Retirees have a recent additional incentive to save any windfall. The inheritance-tax regime is becoming increasingly generous: by 2020 a couple will be able to leave £1m ($1.3m) tax-free to their children, if it includes their house, up from £650,000 last year. All this suggests that the boost to savings from higher interest rates is unlikely to translate into much extra spending.

On the other side of the equation, households with heavy debts may struggle with higher rates. Britain’s pile of mortgage debt is concentrated among far fewer households than it was a decade ago. Prospective buyers have to stretch to get a foot on the housing ladder. Since 2012 the average mortgage for a first-time buyer has equalled 3.4 times their income, up from 2.6 times at the turn of the millennium.

Many have locked in low rates on these mortgages with fixed-rate products. Such deals typically last for between two and five years, however, not the 30 years that is common in America. And of all outstanding mortgages, roughly 40% are on variable rates. Our analysis suggests that, because mortgages have become so hefty, a given interest-rate rise would ultimately result in a bigger squeeze on recent homebuyers’ income than at any other time on record.

Poorer Britons could also suffer. Lately the rate of personal insolvencies has risen, in part because of tough welfare policy and falling real household incomes. Those whose incomes have been squeezed often rely on short-term loans to tide them over. If the cost of repayment rises, more might struggle. Indeed, a survey in the bank’s latest inflation report found that, after a hypothetical decline in real incomes, “households who would reduce real spending the most tended to have fewer savings and be more concerned about their debt.”

Whatever happens next week, rates will remain low, meaning that monetary policy will continue to favour borrowers over savers. But in shifting the balance, the bank must tread carefully. It has signalled that interest rates will rise only at a snail’s pace—perhaps 0.25 percentage points every year. A more rapid increase could prove to be an unwelcome jolt.