The newly-approved Strategic Housing Investment Plan (SHIP) will secure investment in a total of 1,695 properties across North Ayrshire over the period 2020-2025, working alongside Registered Social Landlords.

The plan includes a commitment for more new-build homes on top of the council’s already ambitious proposals as well providing a catalyst for the regeneration of towns and communities across the area.

Yvonne Baulk, Head of Service (Physical Environment), said: “We already have one of the biggest council house building projects in the UK and our new Strategic Housing Investment Plan really underlines that commitment to provide modern, affordable homes for our residents.

“Our ambitious house-building programme has delivered 345 news homes so far and, by 2025, we will have built 1,575 high-quality, new council homes, with the Registered Social Landlords adding to that total.

“These new homes will be built in every single part of North Ayrshire, from Irvine to the Garnock Valley, from the North Coast to the Three Towns, and even on our islands of Cumbrae and Arran.

“This is all part of our transformational ambitions for North Ayrshire. Major construction projects like this are crucial in our drive to regenerate our towns and will also secure new and existing jobs and training opportunities for North Ayrshire businesses and residents.”

Plans to build 55 affordable new council homes on the site of the former primary school site in Dumbarton have been approved by councillors.

The 1.9-acre area has been empty since the former Aitkenbar Primary School was demolished in 2016, following its relocation to a purpose built shared campus nearby.

A tree-lined road will be formed through the centre of the site, from Howatshaws Road, and a new footpath will connect the site with the adjacent children’s play area and woodland path.

At a meeting of West Dunbartonshire Council’s planning committee yesterday, councillors were also told how new tenants in the homes would benefit from a community garden, which will have shrubs, a seating area, and community art designed in partnership with local schools and an artist. 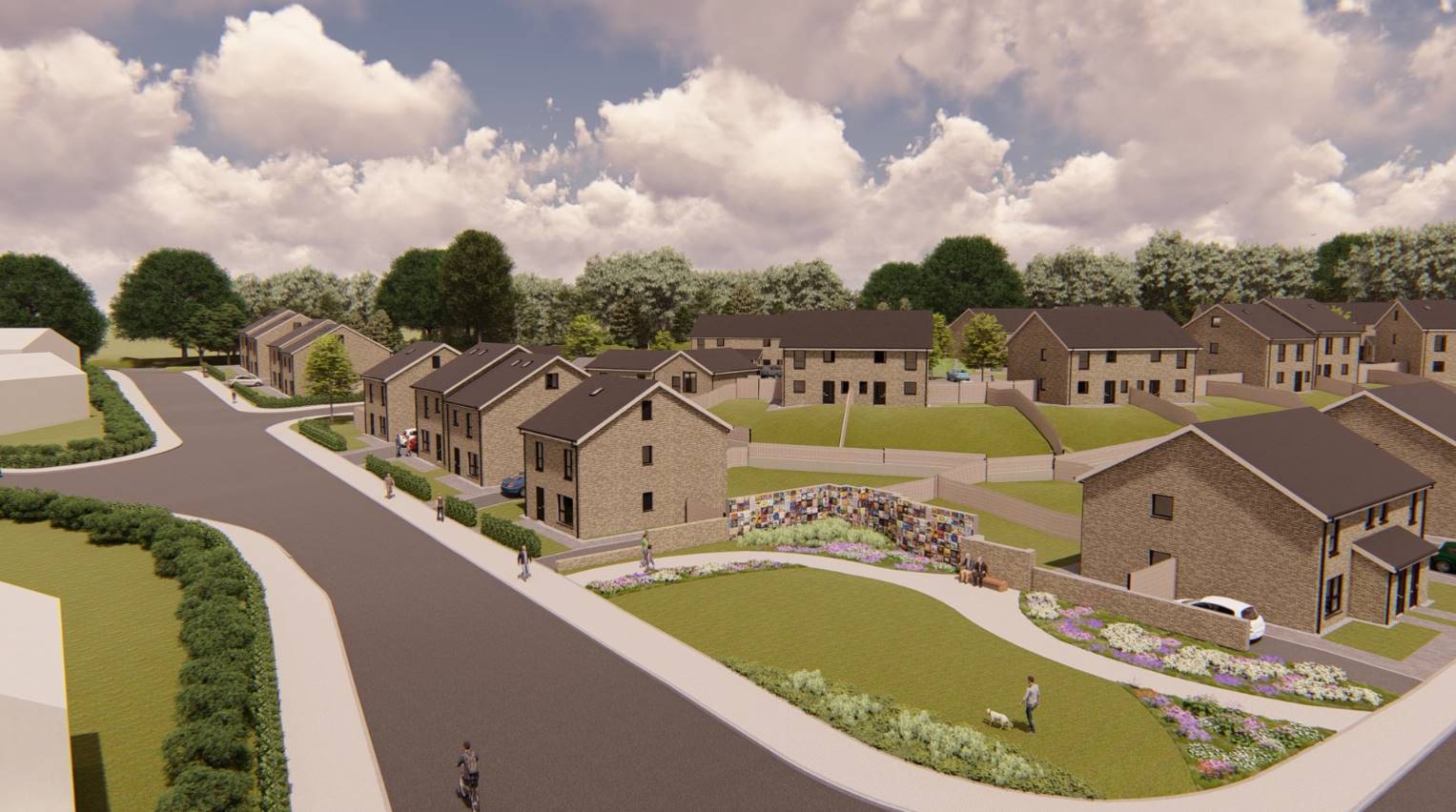 Councillor Diane Docherty, vice chair of the planning committee, and convener of housing and communities, said: “I was really impressed with the plans for the new use of this site. It has been well thought out to ensure that this new development can fit in with the existing community and I’m sure it will bring a great deal of benefit to the surrounding area.

“The facilities on offer, including the Community Garden and its close proximity to schooling, is bound to make this site very popular when complete.

“We are committed to providing affordable and efficient new homes for our residents, and it is exciting to see how this development will take shape.” Figures have revealed the extent of the loss of council housing across London between 2016 and 2017. The Canary has been given access to in-depth calculations, which show some boroughs losing council homes at a shocking rate, including one which lost 5% of its total in just one year.

As Inside Croydon reported, figures [xls] from the Ministry of Housing, Communities and Local Government on the number and type of houses across England show that, in London, there were 3,620 fewer council-owned houses in 2017 compared to 2016. But, for the first time since 2014, there was also a net loss in the number of overall social housing properties (including housing association stock).

She also gave The Canary the breakdown of the net change in the number of council homes by borough. The figures show that some boroughs were losing council homes at a far faster rate than others:

Labour-led boroughs reported some of the highest losses. These included Ealing, which lost over 5% of its total council housing stock; Hackney, down 1.7%, and Islington, down 2.2%.

Sadiq wants to get London building much more social rented housing, and so earlier this month he launched the first-ever City Hall programme dedicated to council housing, that will help get 10,000 new council homes underway over the next four years.

But the fact of the matter is that, at the same time, London is losing council homes through the national Right to Buy, and the government is failing to give councils the resources or obligations to replace any homes sold. To do all he can to help protect social housing, Sadiq’s new scheme offers councils an innovative way to ringfence their Right to Buy receipts to invest in building new homes to replace those sold in the local area.

As Mayor, Sadiq has also introduced tough new policies that, for the first time, protect any social housing that may be demolished, including by giving residents a say through ballots on schemes that want his funding. Although a true step change in the amount of social housing in London will require far more money and powers from national government, Sadiq’s efforts already mean London has started to build homes based on social rent levels again after the pipeline he inherited from the previous Mayor shamefully saw new social rented housing drop to zero.

But Berry told The Canary:

The new stats for each borough show this is partly due to speculators driving Right to Buy sales in high value areas like Islington, but the drop in council home numbers is also more acute in some boroughs with big ‘regeneration’ programmes, like Ealing and Barnet.

Responsibility for this has to lie ultimately with the Mayor. London clearly needs more powers over housing policy to put a brake on Right to Buy. But our councils also need to stop knocking down our existing homes, and our Mayor needs to do more to prevent this with the powers he already has.

Khan is going to have his work cut out if he’s going to stem the tide of London’s housing crisis. So far, his plans have not held water with politicians like Berry. And it remains to be seen if London’s Labour Mayor will be any more effective than his Conservative predecessor at restoring social housing across the capital.

Sadiq Khan has pledged to build 10,000 new council homes in London over the next four years.

The mayor of London will use funds from a £1.67bn pot he secured from the government in its spring statement to increase the number of homes in the capital.

He is also allowing London councils to bid for grant funding at a special rate, which will allow them to offer new homes based on social rent levels more easily, his office said.

Mr Khan criticised the government for failing to give councils in London the freedoms they require to ensure homes sold under the Right to Buy scheme are replaced.

Since Right to Buy was introduced in 1980, 306,000 social homes have been sold by councils in London, according to the Ministry of Housing.

During the same time, only 62,000 new homes have been built at social rent.

Mr Khan said: “I grew up on a council estate and I know first-hand the vital role social housing plays in London.

“Council homes for social rent bind our city together, and they have been built thanks to the ambition of London’s councils over many decades.

“Back in the 1970s, when I was growing up, London councils built thousands of social homes, providing homes for families and generations of Londoners.

“But the government has turned its back on local authorities, severely hampering their ambition to build by cutting funding and imposing arbitrary restrictions on borrowing.”

“I want to help councils get back to building homes for Londoners again, and I’m doing that with support from the £1.67bn fund I secured from government to help get 10,000 new homes underway over the next four years.

“I am offering councils expertise and resources from City Hall to scale up their homebuilding programmes, and I will help them to replace homes sold through Right to Buy.

“The government is failing to enable councils to replace the hundreds of thousands of council homes sold through Right to Buy, and so I will do all I can to help councils replace as many of them as possible.”

More council homes are set to be built across Nuneaton and Bedworth in a bid to ease the ever-growing waiting list.

Nuneaton and Bedworth Borough Council has, unlike many other authorities across the country, been forging ahead with plans to build more council homes.

As a result, it has been awarded what is known as full Investment Partner status by Homes England, a public body sponsored by the Ministry of Housing, Communities and Local Government.

With the title comes a grant of £120,000, which the council is using to build more affordable homes, including a new project in Bedworth.

The council’s latest build programme is at Ashington Road, Bedworth, where there will be four new two-bedroom homes.

New modern methods of construction are being piloted which means they will be ready for occupation far faster than traditional brick build, helping the council to meet the notoriously high level of demand for affordable rented housing across the two towns.

Councillor Dennis Harvey, Town Hall leader, said: “This is fantastic news – it is a real vote of confidence in our experience and ability as a housing developer; few local authorities have been awarded full Investment Partner status by Homes England so this is a really significant achievement.

“The assessment team were really impressed by our strong track record in the delivery of new housing and in the quality of the recent programmes at Abbey Street and Kings View.

“Full Investment Partner status means that we’re considered to be a safe pair of hands in building houses and as such, we have been given certain privileges and better access to grant funding.

“This allows us to better serve our residents by meeting the demand for good quality affordable new rental homes within the borough.”