Suzanne Albers, senior director, structured finance at Fitch Ratings, analyses the housing markets of countries around the world and finds similarities as well as some unique differences

Fitch examines 22 countries in its annual Global Housing and Mortgage Outlook report and national home prices are forecast to rise this year in 19 of these, with UK, Norway and Greece the exceptions. However, the rate of growth is expected to slow in most markets and risks are growing as the prospect of gradually rising mortgage rates comes into view this year.

Over the past few years, the ideal conditions for rapid home price rises existed in several markets, with the combination of extremely low borrowing costs, readily available credit, steady economic growth and limited housing supply. Price rises have been most prominent in markets that have seen mortgage interest costs fall close to record lows, while consumers still have solid employment prospects.

Home price increases in 2017 generally exceeded our forecasts; in Ireland, Canada and the Netherlands they have been far higher than anticipated, as low interest rates outweighed home purchase affordability constraints. Stable or improving economic growth and employment will support prices in addition to mortgage rates only rising slowly in most markets, following gradual unwinding of quantitative easing, which will feed into higher policy rates and more expensive bank funding.

Fitch expects home prices to rise by 10% in Ireland in 2018, which is the only prediction for a double-digit increase, as demand is boosted by government support for first-time buyers. Home prices are finally bottoming out in Italy after years of price declines, leaving Greece as the only European country with falling prices. Prices will rise by 1%-5% in the core European markets and between -2% and 5% in southern Europe.

Turning to the UK, Brexit uncertainty, stretched affordability and low income growth led to national house price growth in 2017 dropping to less than half of its 2016 level. However, low unemployment, historic low interest rates and a housing supply shortage continue to support home prices. Fitch expects average home prices to remain flat across the UK in 2018 and a small fall in London and the South East due partly to the possibility of financial services jobs being relocated to the continent.

Some global hotspots cooling
In 2018, we expect prices to stabilise or drop modestly in overheated markets in several cities, but if corrections are only limited after several years of very high growth, the risk of large price declines in future downturns remains.

In 2017, we saw three cases in which multiple factors pressured prices in overheated markets: Oslo faced heighted supply, lending limitation and falling immigration; whereas London was affected by decreasing demand from foreign nationals in light of Brexit uncertainty and buy-to-let changes, including lower tax deductibility for rental income. In China, the impact stemmed from a range of home purchase and mortgage lending restrictions. Fitch believes that in 2018 a combination of factors will be needed to constrain speculation-led house price rises.

One area that regulators are focusing on is limits on non-residents. In 2018, we expect some impact from limitations on foreign, non-resident buyers in Australia and parts of Canada, while a new limit is also expected to apply in New Zealand. When combined with the 2017 limitations on foreign currency transfers out of China by Chinese nationals, non-resident demand is expected to drop in several cities. However, many markets also have demand from first-time buyers that may enter the market if prices stabilise or fall.

The graph opposite shows the change in home prices over four years for the region with the largest increase, the smallest increase and the country average. Where price growth cooled in 2017, such as in Norway, the UK and China, the gaps shown (between the four-year growth rates from the areas with highest and lowest growth) reduced compared to these levels in 2017. The narrowing has almost exclusively come from lower growth at the top end rather than catching up from the bottom.

Some gaps are still growing, including in countries with booming centres such as the Netherlands, Austria and Canada and to a lesser extent in Italy and Germany. Going forward, we may see more cases like Vancouver in which regulation only steadies prices briefly before speculation pushes them up again. Also, large economic events that could impact large cities and potentially would also likely impact rural areas that have stagnant home prices, so we would expect regional disparities to continue.

Canada is also interesting from the question of urban versus rural fundamentals. Certain cities around the globe, such as Toronto, London and Auckland, have had high net inward migration, strong economies and strong prices rises. These markets attracted foreign, non-resident investment and expectations for further growth from residents. With the exception of Brexit’s potential impact on migration to London, these migration trends are expected to continue. However, while Toronto, Canada’s largest city by population, and Vancouver, the seventh largest city have seen this dynamic, Montreal and Calgary (the second and third largest) have not, which shows that the urban/rural relationship is only part of the cause. 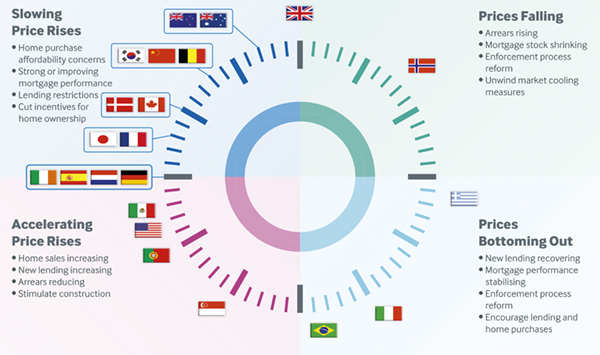 Lending will grow but pace will slow
Gross new mortgage lending will rise in 2018 in 18 of the 22 markets covered in Fitch’s Global Housing and Mortgage Outlook, but rates of increase will mostly be lower or unchanged from 2017. Demand for property remains strong, although refinancing volumes are slowing after borrowers locked in low rates. Coupled with still low margins and competition to lend to strong borrowers, this could push banks down the credit curve to maintain volumes, creating a medium-term risk to performance.

The composition of new lending is changing in some markets in response to borrower preferences and regulation. For example, fixed or fixed-to-floating rate loans now represent around half of Spanish originations. Denmark has seen a shift towards longer fixed rates and amortising loans in recent years. In Australia, the regulator is restraining lending growth in high risk segments. US borrowers may seek second liens and home equity lines of credit as more lenders re-enter this market.

In North America, US lending volumes will grow after contracting slightly last year. Over half the country’s biggest lenders are now non-banks, and some are active in non-prime lending. Banks have ramped up prime quality and agency loan purchases from third-parties. Regulatory intervention, including mandatory interest rate stresses, will slow Canadian lending growth.

Like the US, the UK will continue to see activity from non-bank lenders, but in the UK, these new players are typically focussed on the buy-to-let market. We think regulatory changes and stricter underwriting guidelines will continue to dampen buy-to-let lending while overall UK mortgage lending volumes will be unchanged.

Dutch and German volumes will grow like last year, with competition in the Dutch market keeping costs low and supporting refinancing. In France and Belgium, refinancing is largely complete and volumes will contract. Other than Italy, gross new lending in the eurozone periphery will post double-digit increases. Portugal will see the largest increase (20%), but the stock of mortgage loans will fall or remain flat until 2019 at the earliest, as amortisation offsets new lending. In Ireland, Central Bank of Ireland proposals may encourage competition between lenders.

In the Asia-Pacific region, less refinancing will see Japanese new lending contract, while other developed APAC markets post single-digit gains. Australian lending growth will slow slightly due to recent limits on interest-only and investment lending, while New Zealand will see steady growth of around 3%. Lending growth in Singapore is picking up to 5%-7%. Mortgage restrictions are among the steps taken to cool the Chinese housing market. Our forecast of a 17% rise in net new lending in 2018 is high, but would be less than half that seen in 2016. Strong asset quality and relatively low risk weights will sustain banks’ appetite to lend to the extent possible.

Arrears to stay low as rates gradually rise
Mortgage arrears are at very low levels in most markets. They will only move in one direction as mortgage rates rise slowly due to higher policy rates and more expensive bank funding from the gradual unwinding of quantitative easing. Floating-rate loans and borrowers refinancing to new rates will be first affected. Long-term fixed-rate loans are less exposed to increasing rates, but fewer re-financings mean lower lending volumes, so lenders may face pressure to relax their origination standards, subject to regulatory limits.

We forecast arrears to remain below 1.0% in 12 of the 22 countries in this report, and to increase marginally in five. Monetary tightening should have a limited near-term impact, as mortgage rates will rise gradually from historic lows, and borrowers in fixed-rate markets have locked in low debt service costs. Legacy portfolios are usually resilient to modest rate rises, because borrower profiles have often strengthened and weaker borrowers have defaulted. 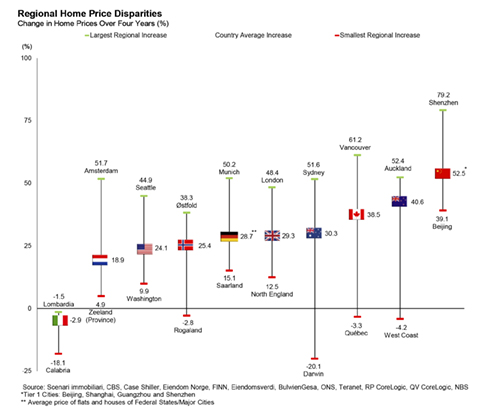 Arrears are close to their natural floor in many markets. But stabilising prices in some submarkets and modest pressure on household finances from sluggish income growth will drive a slight deterioration in performance. Floating-rate markets (and those with short fixed-rate periods) where household debt is high, such as Australia, New Zealand, Norway and the UK, are significantly more vulnerable to faster-than-expected rate rises. However, lenders have usually underwritten loans based on substantially higher rates, for example, under regulations for affordability stress testing in place in the UK since 2014.

US delinquencies are nearing pre-crisis levels nationally, with performance correlated with prices. The dominance of fixed-for-life loans limits the impact of Fed tightening. Canadian interest rates are also rising, but unemployment will continue to trend down, supporting performance.

For the UK, we consider in our forecasts an orderly outcome for Brexit including a transition period from March 2019. In 2018, economic uncertainty, monetary tightening and the resulting reduced access to cheap funding and potential falls in real disposable income could cause a moderate rise in UK arrears from a low level to 0.9% of prime loans being in three months or more of arrears by year end. We expect that a modest and gradual rise in interest rates would not cause major asset performance problems, although borrowers with legacy pre-crisis, interest-only non-conforming loans may be more vulnerable.

Elsewhere in core Europe and Scandinavia, we forecast no changes to arrears levels, which will remain below 0.5% for Germany, Netherlands, Norway and Denmark. With the exception of Norway, these are mostly fixed-rate markets.

All three countries where we forecast arrears to fall modestly are in the eurozone periphery, and these are Ireland, Italy and Portugal. Irish courts appear more willing to grant possession orders and the economic outlooks are more stable in Italy and Portugal. Greece’s arrears are stabilising at a very high level. Spanish banks have sold large non-performing loan (NPL) portfolios to specialist investors, whose expertise could expedite recoveries. Italian banks are also stepping up portfolio sales.

Australia and New Zealand will post small rises as home prices in big cities stabilise. Arrears in other APAC markets will remain below 0.5%. Korean delinquencies will remain close to their record lows, with Chinese performance continuing to be supported by stable economic conditions and prudent underwriting standards.

2018 – a steady year but challenges remain
Our central case predictions for most housing and lending markets for 2018 suggest a relatively steady year although we note that several overheated cities may see stabilising prices or declines in 2018. Prices will rise in most countries, but at a more modest pace than in recent years as mortgage rates increase only gradually while economic growth is maintained. We also expect a steady year in the UK, but as Brexit uncertainty continues, home prices and mortgage lending will stabilise while arrears for prime mortgage will show an increase but remain low.

The longer-term outlook is obviously less predictable. If several markets do not cool this year, then there is an increased chance that house prices in some markets will dramatically overshoot fundamental values. In that scenario the risk of a severe correction at some point thereafter becomes more likely.