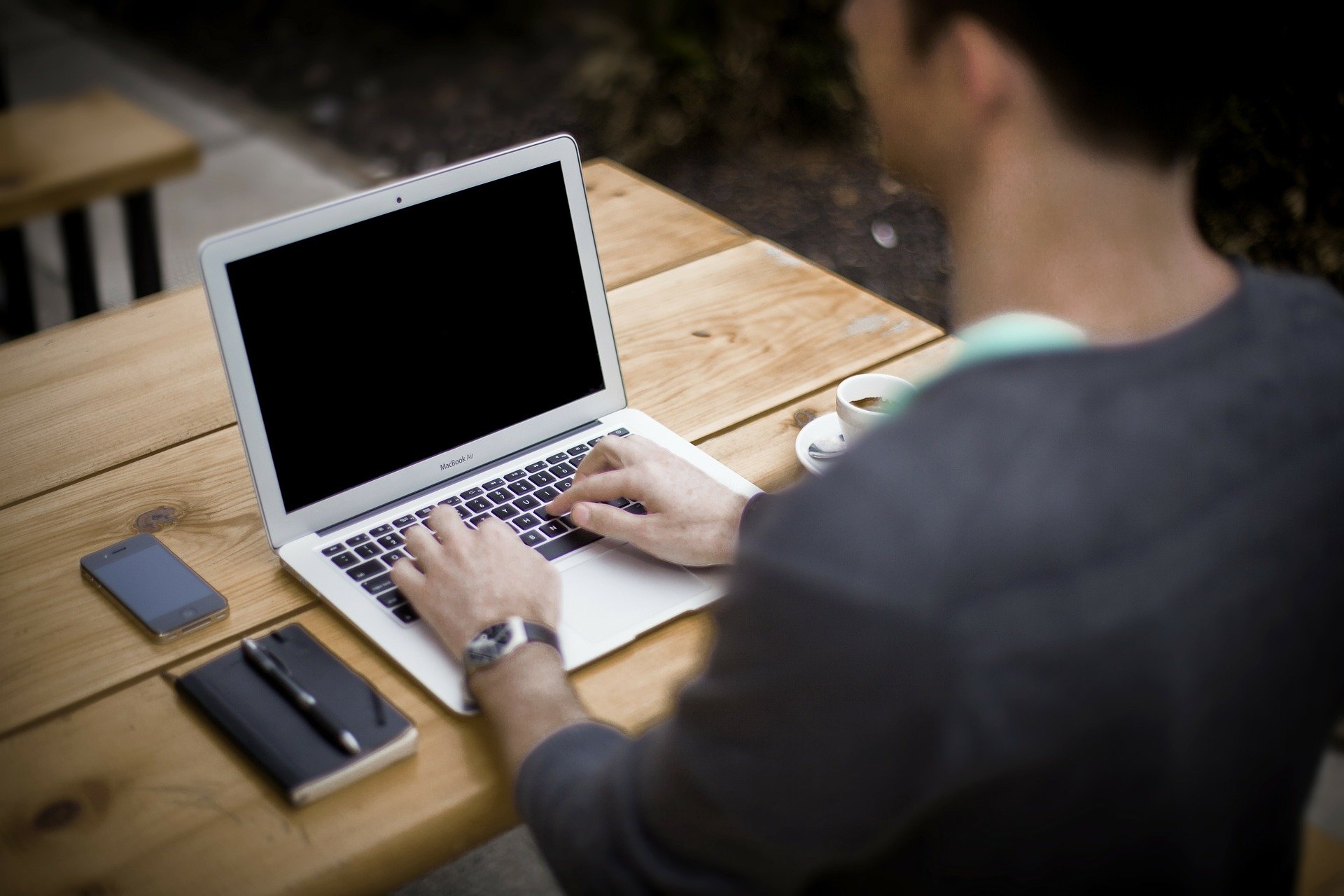 According to a Resolution Foundation report, wages were set to increase in the New Year despite slow economic growth.

This would take wages, when adjusted for inflation, past their April 2008 peak for the first time, reversing an 11-year pay downturn.

But it predicted this wage turnaround may not be sustainable as economic uncertainty surrounding Brexit sets to weaken the job market.

The report pointed to a fall in youth employment, a decline in the number of vacancies and a poor employment outlook by businesses as potential warning signs of a stagnating job market.

This gloomy forecast follows a mixed year for the British economy.

2019 saw the UKs weakest GDP growth outside of recessions since the Second World War, but employment levels and pay growth hit a record high.

Commenting on the report, Torsten Bell, Chief Executive at the Resolution Foundation, said: “2019 was a bad year for the economy, which looks set to have recorded its weakest GDP growth outside of recessions since the war.

“However, the part of the economy that households really care about – the labour market – defied the economic gloom and delivered record employment and decent pay growth.”

He added: “As we look ahead to the new year, the crucial living standards question facing the country is whether the labour market can continue its bullish run into 2020.

“The future is an uncertain land, but our best guess is that 2020 will be very different from the last few years.

“We may well see a welcome return to record pay levels, but a less welcome retreat from record employment, with worrying signs including falling vacancies and rising youth unemployment.”

Mr Bell also called on the government to focus on falling business investment in the New Year, adding that this issue “received next to zero discussion during the election campaign”. – Wages picked up in first quarter due to tightening labour market.

– Economists divided over how many times BoE will raise rates in 2018.

UK economy watchers were given reasons for cheer Wednesday after a key survey by the Bank of England showed wages picking up during the first quarter, although the implications for interest rates may be less straightforward than the headline numbers appear to suggest.

The BoE’s survey of eight regional agents showed average pay settlements across the UK increasing by some 2.5% to 3.5%, due mainly to improved profitability among exporters, a rise in the national living wage and higher levels of consumer price inflation. Respondents to the survey cited difficulties in recruiting and retaining key staff as being behind decisions to raise pay.

“Often employers and staff considered the broader reward package, including non‑pay elements, such as flexible working and healthcare, which allowed some companies to limit pay increases. Growth in total labour costs was expected to be boosted this year by an increase in the minimum auto‑enrolment pension contribution,” the Bank of England added.

Wage pressures are important for the economy and Pound Sterling because of their influence over demand growth and inflation. Higher wages leads to growth in consumer spending and can mean higher inflation further down the line. Inflation is what the BoE seeks to contain when it raises interest rates, which are themselves the predominant driver of exchange rates.

“Although a May move is well price in, the GBP could potential draw further support from expectations of a persistent series of rate hikes, though this would necessitate firm evidence that wage inflation was gathering pace,” says Jane Foley, Senior FX Strategist with Rabobank. 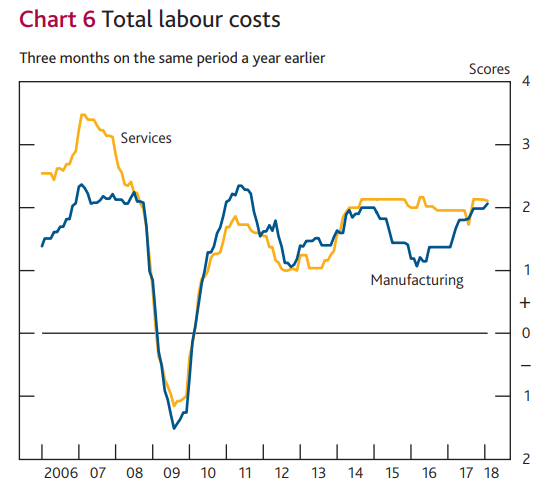 “Recruitment difficulties had remained elevated and were one of the primary concerns raised by many contacts. In a small but growing number of cases, the inability to fill positions was constraining growth. The list of regularly reported skill shortages was broadening out from construction, engineering, software development, professional services and logistics to hospitality, warehousing, agriculture and food,” says the Bank of England.

That said, tightening labour markets come against a backdrop where businesses are increasingly anticipating that other cost pressures will wane over the course of 2018, which could put downward pressure on inflation in the short term.

“A survey on corporate pricing by the Agents showed that firms expected output price inflation to fall back this year as import price inflation eased,” the BoE says. “Consumer goods price inflation had eased but remained elevated, though contacts expected it to abate over the coming year, especially for imported goods such as clothing and cars, as the effect of sterling’s depreciation wanes.”

While the March survey would appear to present a mixed outlook for inflation, it was unambiguously more positive on the outlook for investment. Bank of England representatives found business investment intentions had improved during the first quarter, particularly in the manufacturing sector. 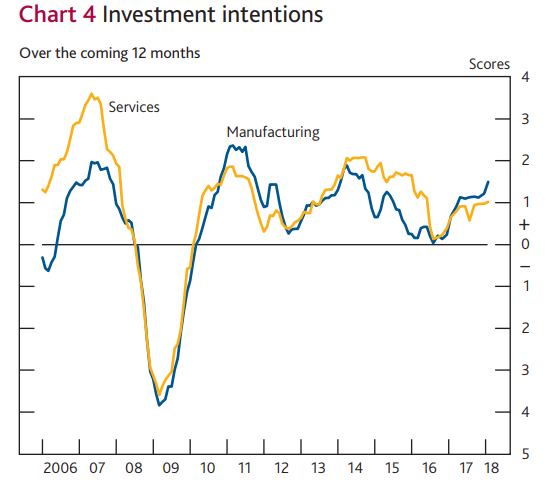 “With [last] week’s inflation and labour market figures revealing that the real pay squeeze has essentially come to an end, the biggest constraint on consumer spending is abating a bit earlier than expected,” says Paul Hollingsworth, a senior UK economist at Capital Economics, in a recent note.

Independent economists, as well as Bank officials, have been flagging the trend of rising wages for some time now. This is while markets see pay growth giving the Bank of England cause to raise interest rates again this year, likely in May, despite the fact that consumer price inflation has fallen and is expected to fall further in the coming months.

“Ee think that the MPC will take advantage of fairly solid growth over the next few years to increase interest rates a bit quicker than markets currently expect. We are sticking with our view – made back in September 2017 – that the MPC will hike again in May, and by a further four times before the end of 2019, taking Bank Rate to 1.75% by the end of that year,” Hollingsworth adds.

Not everybody agrees that the BoE will raise rates faster than financial market currently expect. In fact, some say the BoE will end up raising interest rates at a slower pace than even the Monetary Policy Committee has suggested.

“What really matters for the MPC, however, is how stronger wage growth feeds through to demand and inflation. We note three limiting factors,” says Samuel Tombs, chief UK economist at Pantheon Macroeconomics.

Tombs notes that post-tax income growth has risen notably in recent years, due mainly to changes in tax rates and relief thresholds, to such an extent that the 3% increase anticipated this April will be the smallest increase in take home pay for Britons since 2010. This means that, after taking into account rising salary levels, post-tax income growth will only be a little stronger in 2018 than it was in the prior period.

In addition, the Pantheon team flag that take-home pay may be squeezed further during the looming financial year by changes to pensions rules that will require employees to contribute a larger share of salaries to their savings pots if they want to qualify for employer contributions. These rules take effect at the same time as households are, according to Pantheon, preparing to save an even larger share of their monthly incomes to replenish diminished savings pots.

“For all these reasons, then, the MPC need not meet a modest recovery in wage growth with an aggressive policy response. We still look for just one 25bp increase in Bank Rate this year, and two hikes next year,” Tombs concludes.