– The UK construction industry saw a soft start to 2019.

The UK construction sector saw a soft start to the New Year, according to IHS Markit PMI data released Monday, with both current activity and new order growth slowing during the January month in a manner that could bode ill for other sectors of the economy.

January’s IHS construction PMI came in at 50.6, down from 52.8 in December, when economists had anticipated a decline to only 52.6. That’s the lowest level for the index since March 2018 when a fortnight of snow and inclement weather brought the industry to a standstill.

All three subsectors of the industry saw current activity levels soften this January, with commercial construction firms seeing the most notable deceleration. Companies told IHS that uncertainty over Brexit and the impact an EU exit will have on the economy is the main thing holding them back.

Growth in the civil engineering sector continued in January although at a reduced pace from the 19-month high seen back in December, while the supply and demand disparity in the UK housing market meant residential construction firms saw only a modest deceleration last month.

“Uncertainty about Brexit has snuffed out the recovery in the construction sector. The total activity index dropped to its lowest level since the March 2018 snowstorms and now is below the 52 level which in practice has separated rising from falling construction output in the past. Builders have become more pessimistic about the outlook too,” says Samuel Tombs, chief UK economist at Pantheon Macroeconomics. 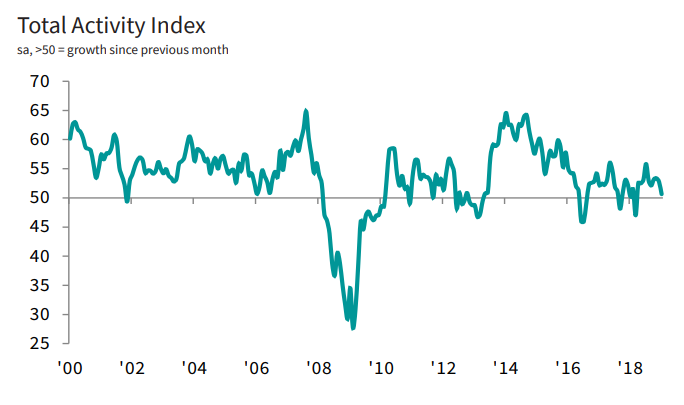 PMI surveys measure changes in industry activity by asking respondents to rate conditions for employment, production, new orders, prices, deliveries and inventories. A number above the 50.0 level indicates industry expansion while a number below is consistent with contraction.

Markets care about the data because it is an important indicator of momentum within the economy. And economic growth has direct bearing on consumer price pressures, which dictate where interest rates will go next.

Despite the downbeat tone of survey responses addressing conditions in January, most firms are still optimistic about the outlook for the year ahead. However, this could easily change during the months ahead if the UK leaves the EU without any formal agreement governing life after exit day.

Prime Minister Theresa May failed on the first attempt to pass her highly contentious Withdrawal Agreement through the House of Commons, although the bill will be put to another vote before MPs next week.

If it is not ratified before March 29, 2019 the legal position is the UK will leave the EU and default to trading with it on World Trade Organization (WTO) terms. Most economists now say that would weigh on UK economic growth in the short and long term.

“The outlook for the construction sector is quite binary, based on the Brexit path chosen by politicians. In the unlikely event of a no-deal Brexit, the sector likely will slide into another recession, amid weaker business confidence and tighter credit conditions. But provided a deal is signed off, the construction sector likely will enjoy strong growth soon,” Pantheon’s Tombs adds. 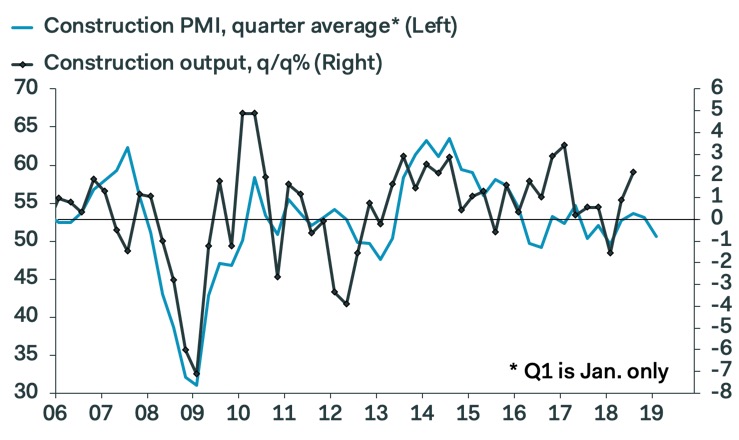 UK manufacturers also saw conditions deteriorate at the beginning of the New Year amid heightened uncertainty over the outlook for international trade, given the U.S trade war with China and almost the trajectory of the Brexit process.

January’s survey of the all-important services sector will be released on Tuesday, which means analysts will then have an idea of just what kind of start to the year the UK’s three largest economic sectors saw. This will be important for the Bank of England (BoE)interest rate outlook and Pound Sterling.

Bank of England officials have said repeatedly in recent months that they see inflation pressures building in the economy and that further interest rate rises will be necessary over the coming quarters if the consumer price index is to sustainably return to the 2% target over the coming years.

However, the exact trajectory of inflation will depend on the performance of the economy over the coming quarters, which itself will be heavily influenced by the outcome of the Brexit process in parliament. The deal-or-no-deal question is most key to the outlook.

“This week’s BoE Inflation Report will see growth and inflation revised lower and the Bank playing up Brexit uncertainty as a policy constraint, but SONIA is still biased strongly toward higher rates this year,” says Adam Cole, chief currency strategist at RBC Capital Markets. “We expect PM May’s “new ideas” to amount to little and the EU to remain intransigent on the backstop.” 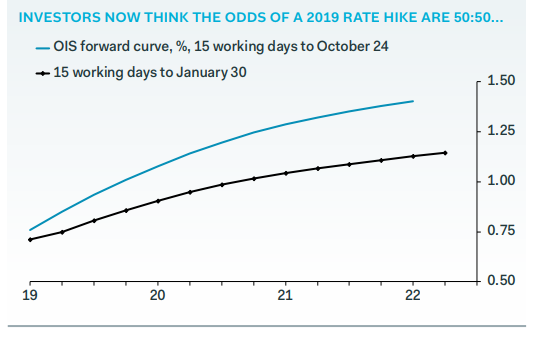 About: Market expectations of BoE base rate. Source: Pantheon Macroeconomics.

The BoE has raised its interest rate twice since November 2017, taking the Bank Rate up to 0.75%, but BoE officials are still saying that further rate hikes will be necessary if inflation is to remain under control in the coming years.

Unemployment has reached its lowest level since 1975 in the UK during recent months, as the post-referendum economy continues to create new jobs, and the number of unfilled job vacancies is still at a record high according to the Office for National Statistics.

This is forcing employers to raise wages and salaries for workers, which the BoE says will lead to even higher inflation further down the line. And the consumer price index is already above the bank’s target of 2%.

Inflation came in at 2.1% for December, down from 2.3% previously but in line with the consensus among economists. However, core inflation rose from 1.8% to 1.9% during the same month.

Core inflation excludes volatile commodity items like fuel, food, alcohol and tobacco from the goods basket so is thought to provide a more accurate reflection of domestically generated price pressures.

The latest economic forecasts suggest the consumer price index will fall again in January but that it will average 2.1% in 2019 even after one more rate hike.

The BoE will announce its latest interest rate decision and economic forecasts at 12:00 on Thursday 07, February.