The housing market is creaking, Royal Institute of Chartered Surveyors (RICS) data showed on Thursday, as homeowners increasingly hold off on selling while affordability issues keep many prospective buyers on the sidelines. However, one economist tells us the fog of Brexit that clouds the sector should lift and we can expect house prices to grow in 2019.

The RICS house price balance came in at -19% for December, down from -11% previously and much lower than the economist consensus for a -13% reading in the final month of 2019. That is a fourth consecutive negative reading.

The balance represents the percentage of surveyors who reported seeing prices increase on their patch during the recent month relative to those who reported declines. A number above 0% means more surveyors saw prices rise, and vice versa. It is derived from survey responses.

“It is hardly a surprise with ongoing uncertainty about the path to Brexit dominating the news agenda, that even allowing for the normal patterns around the Christmas holidays, buyer interest in purchasing property in December was subdued,” says RICS chief economist Simon Rubinsohn.

Buyer enquiries, new sale instructions and the number of sales agreed all declined during December, on average at the national level. The average number of properties available for sale at individual branches of estate agent has fallen to just 42 of late, close to a record low.

The number of new sale instructions declined for sixth consecutive month in December, which the RICS attributes to uncertainty over the impact Brexit will have on prices, while new buyers enquiries fell for a fifth consecutive month albeit at a lesser pace than in November.

December’s sales volumes balance was -11% which, although up from -15% previously, marks a continuation of a long and negative trend. London and the Southeast led the downturn in transactions, while some other parts of the UK actually saw a pick-up.

The data from RICS comes on the same day the Bank of England reports a sharp decline in demand for mortgages in the final quarter of 2018.

In their Credit Conditions Survey for the fourth quarter of 2018, the Bank says, “lenders reported that demand for secured lending for house purchase decreased significantly in Q4, and was expected to decrease further in Q1.” 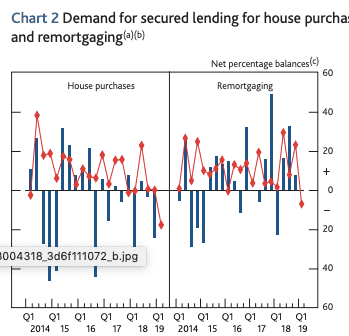 “The housing market still is in the doldrums,” says Samuel Tombs, chief UK economist at Pantheon Macroeconomics. “Surveyors clearly think that Brexit uncertainty is to blame.”

The prices balance was -19% for December, down from -11% previously, marking a fourth consecutive decline and the worst reading for this component of the survey since since the height of the Eurozone debt crisis in August 2012.

Expectations for prices in three months time were almost as dire as the transaction data for December. Surveyors in all parts of the UK now anticipate that prices in their area will stagnate or decline over the next three months. 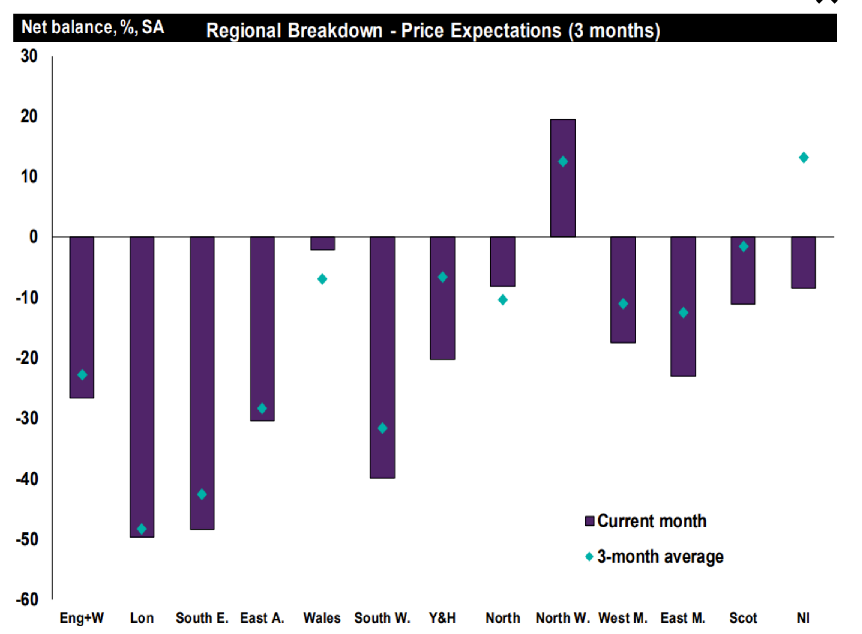 The three-month balance of sales expectations was -28% for December, the poorest reading since the survey began back in 1999. However, on a 12-month basis the outlook is a bit brighter.

A majority of surveyors anticipate that house prices will rise over the next 12 months, with both RICS and independent economists linking this to the timeline of the Brexit process. By January 2020 the UK’s path out of the European Union should be clearer, if the country departs the bloc at all.

“We continue to think that Brexit uncertainty will subside soon, as the government is forced to pivot towards a soft Brexit with only limited economic consequences; that shift, in turn, should help consumers’ confidence to recover and restore some life to the housing market. Nonetheless, the MPC will have to start raising Bank Rate at a faster rate than in recent years soon,” says Tombs.

Tombs forecasts that UK house prices will rise by only 2% on average in 2019 thanks toBank of England (BoE) interest rate policy, which is expected to exacerbate affordability challenges by pushing up the cost of mortgages.

The Bank of England is widely expected to raise interest rates again in 2019, taking the bank rate up to 1% and marking a third increase since November 2017. It could move as soon as April, although the exact timing of any hike will depend on the outcome of the Brexit process. 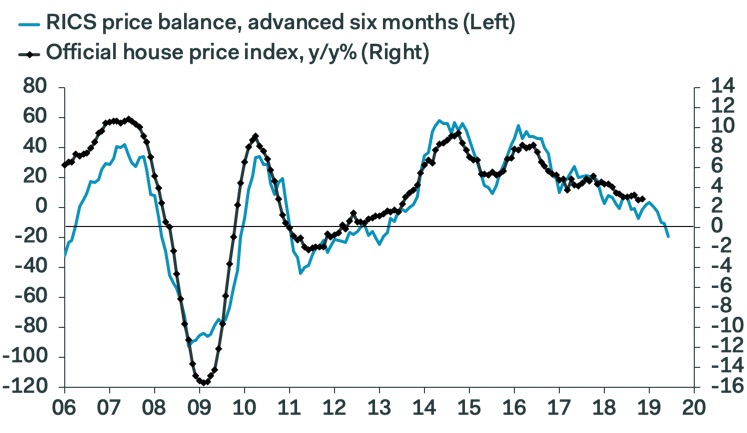